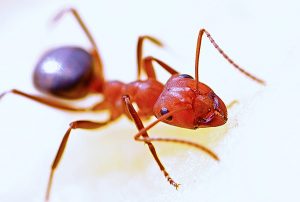 Ant Pest Control Sydney – Ants are a part of the insect family and are in fact a group of small and highly specialised wasp and have one of the most advanced forms of social life amongst the insect world. They live in colonies that vary in sizes from a few to hundreds of thousands of individuals.  Ants are a unique and superior species that can administer and organise their colony, where each type of ant has a specific role to play.

What do ants eat?

Why are ants classified as pests?

Ant Pest Control Sydney – There are many different species of ants in Australia and in fact there is only a small number of ant species that have become pests in and around homes and offices.

Ants travel through unsanitary areas before they end up inside. They are known to carry disease organisms which can cause dysentery, smallpox and even salmonella

Ants scavenge for food in kitchens, other food handling areas, garbage areas and even dog poo. Hence, an ant issue in your home should not be taken lightly.

Some species of ants that can sting and bite, which can even be fatal!

What Ants can be found in Sydney?

The most common ants that can be found in Sydney

An Australian native found in rural and urban areas. They are often a pest of domestic environments and will build their nest in cracks or gaps, beside pathways. They generally enter the home in search of food.

Like other ant species, they will nest underground and in voids, for e.g. roof voids or wall cavities. They prefer sugary liquids and will tend to also feed on aphids and other bugs on domestic plants to feed off their sweet secretions.

Large and are often mistaken for termites, as they prefer to live in rotting and damp woo. Carpenter ants are often found eating at night, so it might not be an ant that you would see during the day, but you may see or hear evidence of their activities late at night. The carpenter ant eats insects, sweets & meat.

Well known in Australia for their aggressive behaviour and their powerful stings. Their venom has known to induce an anaphylactic reaction to victims who have allergies to bull ant stings.

They have large eyes and long, slender mandibles. They have super vision which allows them to be able to track and even follow intruders from approx. 1 meter.

Often nest between pavers and along pathways and will throw out soils. They can also infest wall cavities, leaving piles of debris at the nest entrance. Nests can become very large.

What are the signs of an ant infestation?

How are ants treated?

Pest Control Today uses a product that is designed to eradicate not just the surface ants but the entire nest of ants.

A low toxic bait is placed in areas where ant trails have been seen. The ants feed from the bait and carry it back with them to the nest which is designed to kill the colony and Queen.

External ant treatments are conducted with a product called Termidor. The benefit of this product is that as ants cannot detect that the spray is an insecticide they carry it back to the nest where the chemical is transferred amongst the other ants in the colony which in turn eradicates the entire nest of ants.

How can ants be Prevented?

Ants usually come inside your home or business looking for food. They are attracted to sweet and sticky substances.